When I was a teen and had been living in the cities for a few years I took a trip with my mother to visit my Grandparents. After a 9 hour car ride we arrived tired and hungry.
My Grandmother lived through the Great Depression and learned to use and reuse everything so that nothing went to waste. It turned her into a packrat, but that is another story.
When we got to their home my Grandmother graciously asked if I would like a tomato sandwich. "A tomato sandwhich?" I thought. "Really? What about some bacon and lettuce to go with that?"
I politely declined. Inside I don't think I was so polite.
I had grown up somewhat poor compared to others but nothing compared to those of the depression era, and that is something that I realize now as something that could seriously affect my children more than me if another collapse happens.
I am pretty sure they too would choose to starve for awhile.
Years later I saw a TV show where someone was serving cucumber sandwiches and I instantly thought about my Grandma. There had to be some reason these sandwiches would attract the attention of TV writers. Then a few years later I was visiting my husband's Aunt and she was about to have a party for her garden club.
She was at a loss as to what food to make.
There she was in the kitchen with a pile of cucumbers straight from her garden on the kitchen counter and a few loaves of bread in her freezer, and it hit me.
I told her that I would make cucumber sandwiches. It was a risky move.
She was excited at the idea, though it was something that she had never had.
The only problem was that she didn't have any salad dressing. Not even ranch.
However she had made some coleslaw dressing and had some extra in the fridge so I decided to try that.
Now I wish I had her recipe for that because it was amazing!
The sandwiches were a big hit!
So here I am to bring back the cucumber sandwiches and make some croutons for salad later. 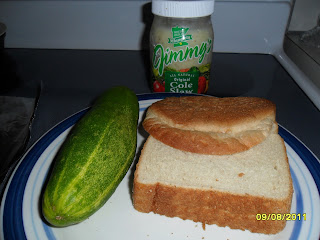 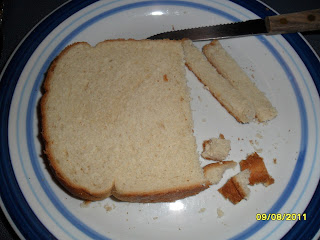 Cut off the crust of the bread and dice for croutons. 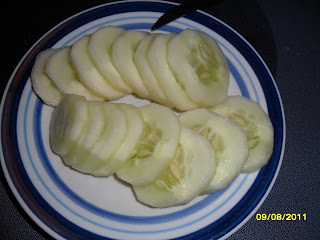 Peel and slice the cucumbers. 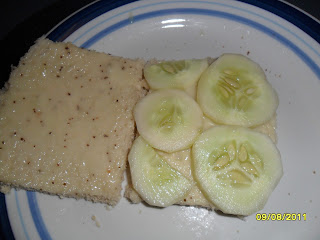 Put coleslaw dressing on the bread and place the cucumbers. 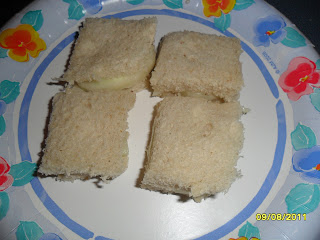 Slice in quarters. They are best as little sandwiches! 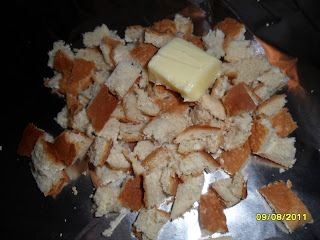 Take your cubed bread crust and add a pad of butter. Use the heel of the loaf while you are at it for more croutons. I know many people discard this but they really shouldn't! 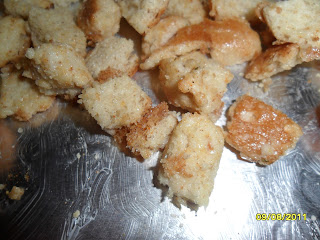 Mix the butter and bread crumbs and sprinkle lightly with a season salt of your choosing. Or get creative and use a cheese powder or tomato powder with a little basil.
Place in the oven and set for 300 degrees F. Once the oven reaches 300, turn the oven off and leave the door shut for at least one hour. Then try a crouton. If it is crunchy all the way through it is ready. They should not be as hard as store bought croutons, but they should not be soft inside.
Let cool completely. I am not sure on the storage of these yet since we used them up on salad before dinner. I know that if you put them in anything too soon they will get soggy and with butter on them they should go in the fridge or freezer.
After you try this you may never buy croutons again.
If you leave the seasonings off you can have your own bread crumbs for stuffing or crab cakes.

These are comfort foods and for good reason. When you are so very hungry any food will comfort that pain. Grandma knew this and her children lived it. A tomato sandwich, or fried gizzards, or cucumber sandwiches can bring you back to a time when things were hard and you were grateful that your tummy no longer hurt.
I hope you found this to be helpful.
Please share with others if you did!
Thank you for stopping by.
Dee Dee
Posted by Firefly5555 at 8:18 PM