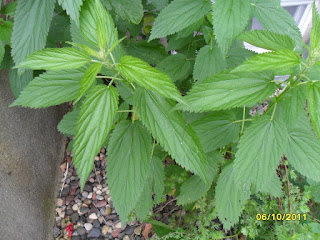 Stinging Nettle, which is also referred to a itch weed, started out to me on the same scale as poison ivy. I was wrong. Not only is it a good weed to grow just outside of windows to detour windows from being used as entry and exits, it turns out that it has a place in the kitchen as well.
The first time I tried Nettle I steamed it and ate it much like you would spinach. I found the texture was hard to get over.
I had no interest in trying it again.
After doing some research I have found recipes for Nettle pesto, soups and even making a pasta with it and I will be testing some of those when I can. There are hundreds of recipes for this plant.
It is said that Nettles are very healthy for you. I have heard differing reports on the benefits.
A word of warning. It is called itch weed for a reason. Use gloves until you blanch the leaves and eat a small amount to make sure you have no allergies to it. Blanching is best done in salted boiling water.
Thank you for stopping by.
Dee Dee
Posted by Firefly5555 at 6:33 PM