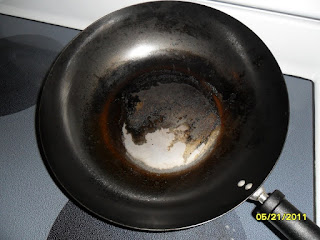 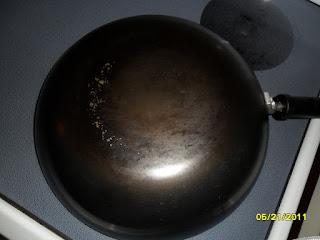 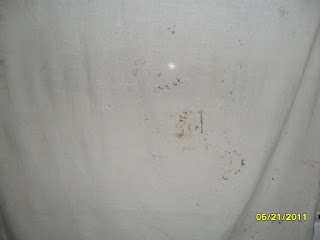 Tonight I had a kitchen grease fire. I guess some people would have been scared by it but I had learned ahead of time how to deal with it thanks to some people that shared a video of it from a survivalist group I am on.
PSU2

I was heating oil for a stir fry and watching the Preakness race at the same time. My husband came into the kitchen and said "This is smoking!" and as I said "Just a minute" the oil ignited. He then said "Fire!" and I missed the end of the race.

I walked into the kitchen to find the pan full of flames and all of the smoke alarms started blaring.
I looked at the pan and walked to the sink. My husband must have thought I was crazy for being so calm. I grabbed a dish towel and got it wet, then I walked to the stove and carefully put the wet towel over the pan and the flames when out.
My stir fry pan died but the rest of us were spared. The moral here is DO NOT leave your stove on unattended.
The last picture is the towel I used to put the fire out. The black spots you see are grease. What you don't see is the small holes in the cloth from the heat stress.
It took at least 2 hours to air out the house so it wasn't so smoky and I had to do that during a thunder storm. I can still smell the burned oil. Tonight was a challenge.

I ended up using a skillet to make my stir fry. With the stove I have I don't think it makes much of a difference anyways.

The other ways to put a grease fire out is smothering with a lid (which I don't have a lid large enough for this pan) or baking soda (which would have taken longer to use).
Also, turn off the fuel source when dealing with a fire like this.
We were lucky here. Very lucky. I could have lost so much more than a stir fry pan.
NEVER EVER pour water on a grease fire, it will explode and take your whole house! A wise man learns from other people's mistakes. I made a mistake, please learn from it.

Be safe and be cozy!
Thanks for stopping by.
Dee Dee